In 1992 reporter Julie Titone wrote an article in the Spokesman-Review, “Canadian company suspected in illnesses“.  The article focused on a group of women in Northport, Washington, and their plight to prove that the large number of diagnosed autoimmune diseases within the community were caused by the residents chronic exposure to the heavy metal toxins released by Teck Cominco, a Canadian smelter located 12 miles up river.

The article begins with neighbors Naomi Palm, Faye Jackman, and

Kay Paparich sitting around Naomi’s kitchen table. In front of Naomi was her hand written notes of a health survey the women conducted within their community.  Naomi referred to it as their “death list”.

The list contained the names of 45 residents who had passed away from similar autoimmune diseases, and 163 living residents, all suffering from the same diseases. In a town of 375 people the list was alarming, to say the least.

After years of the community voicing their growing concerns to state agencies, the women realized their requests for assistance were falling on deaf ears.

Undeterred, these women decided to conduct their own community health survey. After months of knocking on doors, countless phone calls, and nights gathered around Naomi’s kitchen table, they compiled the information the residents had provided.

The results affirmed what they long feared, something was very wrong.

Through their survey, the women discovered that of the 7 families living along Mitchell Road, within a 2 mile radius of each other, fifteen children had been diagnosed with either ulcerative colitis or Crohn’s disease, two very rare inflammatory bowel diseases.

At the time of the survey approximately 1 in 100,000 people in the US were diagnosed with either Ulcerative Colitis or Crohn’s, or 0.001%. In Northport 15 out of 375 people had been diagnosed, 4% of the town’s population.

The survey also showed that of the 6 families living along Waneta Road, across the Columbia River from Mitchell Road, 9 people had suffered from a brain aneurysm, and 3 people had been diagnosed with a brain tumor.

The other 136 living residents who participated in the survey had been diagnosed with 4 specific cancers, parkinson’s disease, multiple sclerosis, and other similar autoimmune diseases.

The small community was paralyzed with fear, and for good reason.

With push pins, highlighters, and a hand drawn map of the town and the surrounding farms, the women mapped out the different illnesses collected from their survey, in an attempt to understand if there was a common denominator.

The common denominator quickly became clear.  It was the air.  The  residents impacted the most lived in  the Columbia River valley. The smelter’s emissions from their smoke stacks admittedly, and visibly, flowed down river, often getting trapped within the valley walls.

What these women didn’t know at the time was the EPA referred to the valley as “The Heavy Fallout Zone”.

Two months after the 1992 article was published, the Washington State Department of Ecology began the first of four phases of air monitoring in the area.  The results of all four phases of the monitoring showed that levels of arsenic were 200 times higher than national safety standards, and levels of cadmium were 18 times higher.

Ecology issued the smelter and the EPA a warning; long term air monitoring of the area was necessary to ensure the safety of the residents and the environment.  Teck did collect data from an air monitor they set up near Sheep Creek between 1999 – 2009, unbeknownst to the EPA, Ecology or the community.

Which means no one but Teck knew the  results from the 10 years of air monitoring data they collected. The data consistently showed levels of arsenic, cadmium and lead to exceed all safety standards.

Who is Protecting Us?

The article ended with one of the women in Naomi’s kitchen, Kay Paparich, voicing her concern for future generations of Northport residents, “It’s too late for my children because they’ve already got these problems, but what about the little ones coming up?”

“The little ones”, that Kay was so concerned about in 1992, are now suffering from the same illnesses that these women agonized over in Naomi’s kitchen 28 years ago.

Fast forward 19 years, Kay Paparich’s granddaughter realized the communities concerns were still falling on deaf ears. So, with the assistance of Citizens for a Clean Columbia, she conducted another community health survey of past and present Northport residents.  The results mirrored those of the 1991 community health survey, and confirmed Kay’s concerns.  Not only were residents still being diagnosed with the same health issues, but cases of multiple sclerosis, Parkinson’s, ulcerative colitis, and Crohn’s disease had steadily increased.

The results of the 2011 community health survey, specifically the extremely high number of diagnosed cases of ulcerative colitis and Crohn’s disease, caught the attention of Dr. Korzenik, Director of the Crohn’s and Colitis Center at Brigham and Women’s Hospital (BWH), and one of the leading IBD researchers in the country. With the assistance of Massachusetts General Hospital (MGH), and Harvard Medical School, Dr. Korzenik and his team conducted their own community survey. 119 current Northport residents participated, 17 residents had confirmed cases of either Crohn’s or ulcerative colitis.  Dr. Korzenik stated;

“That’s about 10 to 15 times what we’d expect to see in a population the size of Northport. I’m not aware of any other cluster like it.”

In 1991, refusing to be ignored, those women of Northport discovered through their survey and common sense what would take multiple government agencies decades, and millions of dollars, to finally discover.

The EPA  reached an agreement with Teck in 2006, in which Teck agreed to fund a remedial investigation of the Upper Columbia River area and clean up any contaminated areas with levels of toxins that would be hazardous to humans or the environment.  However, the air still continues to be ignored.

All of the studies conducted of the 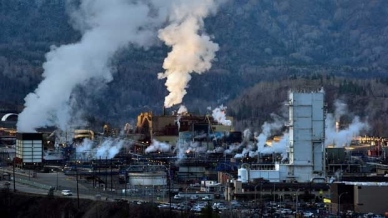 area, as far back as 1931, have forensically and scientifically confirmed that the primary source of contamination is from Teck’s aerial dispersion of heavy metal toxins, through their smoke stacks. EPA project manager Laura Buelow stated;

“The data shows that the soil became contaminated from historical smelting operations at the Trail smelter, specifically the metals coming out of the smelter stacks.”

Ecology’s above recommendation, along with a petition signed by 100 Northport residents, and the opinion of the Northeast Tri-County Health District, was not enough to persuade the EPA to provide Northport with air monitoring.

The EPA informed Northport residents that after much consideration further air monitoring of the area would not be done.  Cami Grandinetti, a manager in EPA’s remedial cleanup program, said;

“From our evaluation of data collected in 1999 to 2009 we believe that the risk to you from the outdoor air in Northport is low.”

The results of past air monitoring of the area, along with the health clusters of autoimmune diseases spanning three generations of residents, and the fact community members continue to be diagnosed with the same autoimmune diseases, seem to prove otherwise.

The EPA is currently completing the final stages of a Human Health Risk Assessment (HHRA) of Northport, and the surrounding areas. An assessment completed without current air monitoring results.

Naomi, Faye, and Kay’s 1991 survey and assessment, conducted with shoe leather, thumb tacks, and a hand drawn map around a kitchen table, will prove to be much more accurate than the results of the EPA’s multi year, extensive, HHRA….because it is lacking the single most important component that made those women’s discoveries so important…common sense.

I am Kay Paparich’s granddaughter. Before passing away from Parkinson’s disease she gave me a tattered, folded, worn page from a notebook. It was their “Death List”. She didn’t want those people to be forgotten.

I added to the list as I collected the results of the survey we conducted in 2011. I continue to add to the list every year. I won’t let them be forgotten either.